A common criticism of Opt-In Replace-by-Fee (RBF) has been that we need to give the ecosystem more time to implement detection of opt-in RBF transactions, arguing that if we don’t users will be put at a significantly greater risk of being ripped off by malicious double-spends. For this criticism to be valid, user and merchant wallets must already be able to detect situations where a transaction may be maliciously double-spent, and warn their users appropriately. On the other hand, if they can’t do that, then opt-in RBF doesn’t change the situation anyway: an attacker doesn’t need to use it anyway to rip people off, and when wallet authors fix that they can trivially add opt-in RBF detection anyway with one or two lines of code.

For merchants payment providers have responded quickly, with Shapeshift.io and Coinbase - among others - publicly announcing that they’ve implemented opt-in RBF detection as part of their zero-conf risk-mitigation strategies.

That leaves user wallets. We tested a selection of the eight most popular wallets out there, including Blockchain.info, Coinbase, Bitcoin Wallet for Android, Mycelium, Electrum, and others. What we found was every wallet tested did a terrible job of protecting users from zero-conf double-spends:

With the above in mind, deployment of opt-in RBF will have zero effect on users’ vulnerability to double-spends. Instead we must strongly recommend that users assume until a transaction is confirmed if the sender chooses to reverse it they can. And in an ironic counter-example to Betteridge’s law of headlines, the answer is yes.

What do we mean by “protect”? We’ll use a simple scenario where Alice is selling bitcoins to Bob in a person-to-person trade:

We assume Alice is not very technically sophisticated, beyond having the ability to run custom double-spend-capable wallet software that someone else wrote. Thus we will only look at the simplest way to double-spend: a low-fee transaction followed by a higher-fee transaction. To that end we will use the author’s doublespend.py script from replace-by-fee-tools in either the default settings, or with the fee of the first transaction being changed from the default using the --fee1 option. The script was run on a full-RBF node using the author’s replace-by-fee-v0.12.0rc1, a fork of Bitcoin Core v0.12.0rc1. Here’s a typical attempt, this one (successfully) against a Blockchain.info wallet:

Even without a GUI these tools require relatively little technical sophistication to use - the full-RBF fork preferentially peers with other full-RBF nodes automatically, and the doublespend.py script does the rest. Adding this double-spend functionality to an existing open-source mobile wallet would only be a day or two of work.

Version 4.46 was tested with a 11µBTC/KB transaction, which displayed immediately:

Yet again, ever after the double-spend was broadcast, and later confirmed, the UI remained the same; even multiple days later the transaction is still displayed in the UI.

The web interface was tested on 2016-01-22 with a 11µBTC/KB transaction. Blockchain.info displayed it immediately, with no visible warning that the transaction was unlikely to confirm in a reasonable amount of time: 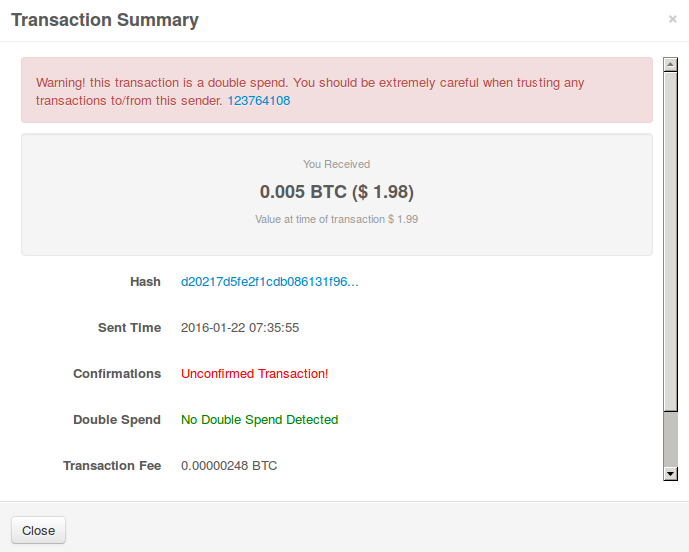 The web-wallet interface was tested on 2016-01-22 with a 11µBTC/KB transaction. Coinbase displayed it immediately, with no visible warning that the transaction was unlikely to confirm in a reasonable amount of time: Version 2.5.4 was tested in the default configuration. While previous versions displayed 11µBTC/KB transactions prior to confirmation, as of this version it appears that transactions must pay at least 50µBTC/KB to be displayed immediately. It took three attempts to get a successful double-spend at 50µBTC/KB, upon which the double-spent transaction was simply removed from the UI leaving the user no indication that the transaction had failed.

Version 1.63 was tested on Android in the default SPV configuration. GreenBits doesn’t seem to display transactions with less than 50µBTC/KB fees, so it took four attempts with 50µBTC/KB transactions (one attempt shown below, and another two failures on another wallet). Again, even after the double-spend has confirmed, GreenBits failed to notify the user:

Eventually the double-spent transaction was deleted entirely from the transaction history, leaving no indication that it had ever happened.